The Streets Division of the Public Works – Utilities & Operations Department, as part of the Pothole Patch 2020 Initiative, has dedicated a crew to find and repair potholes.  The crew is doing their best to spot potholes when they are out in the field and are requesting assistance from local residents to report potholes when they see them.

To ensure that the City’s pothole crew can locate each pothole, please provide specific information whenever possible: approximate size, where the hole is on the roadway (use nearest intersection), and if there is a nearby landmark or address that can guide the team.

The more information we have, the better we can serve you.

Click on the button below to report a pothole:

You can also report a pothole by calling 530-757-5686 or sending an email to pwweb@cityofdavis.org. 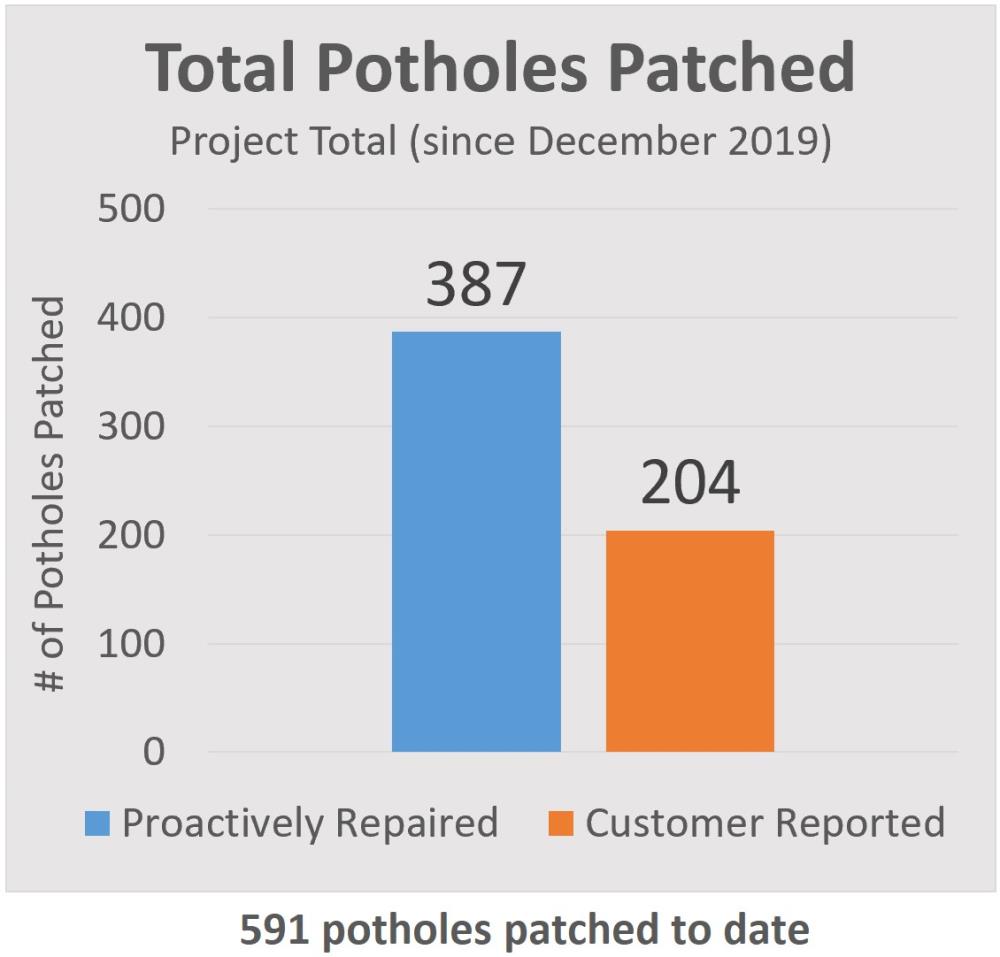 * Pothole repairs are tracked by street section, not individually.  The total repairs shown in the graph reflect a minimum number of potholes patched; more than one pothole may have been patched per each street section counted above. 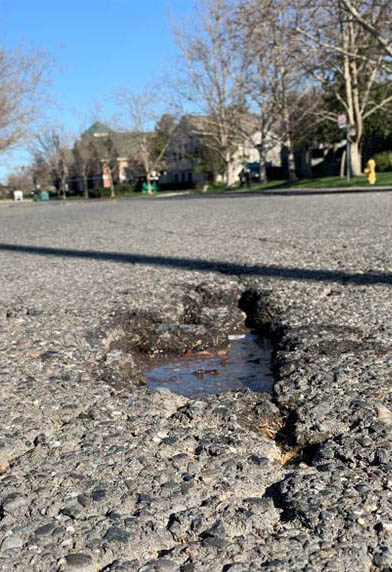 What is a pothole?
Potholes are a type of isolated failure in an asphalt pavement where material is missing, and the presence of traffic passing over the weakened areas causes the pavement to break apart and the size of the hole to increase.

When does it look like a pothole, but it's not a pothole?
Roadway damage or issues that can act like a pothole when you’re driving, but are not actually potholes, include faulting, when there is a difference in the elevation across a joint of the roadway, or pavement failure, which is cracked, broken, depressed or sunken pavement.

How do potholes form?
Water weakens the supporting soil structure and then traffic breaks the poorly supported asphalt surface.

The pothole I reported was filled, but now it has appeared again. Why didn't the repair fix it?
Many pothole patches perform well over several months, or even years. If there are underlying roadway problems, patching the pothole will only be a temporary repair. Weather conditions while the repair was made, the amount of traffic above the pothole, and ground settlement can all impact patch performance. If the underlying cause of the pothole is not corrected, the pothole patches may fail or new potholes may form. See below under Road Repair Information for more details. 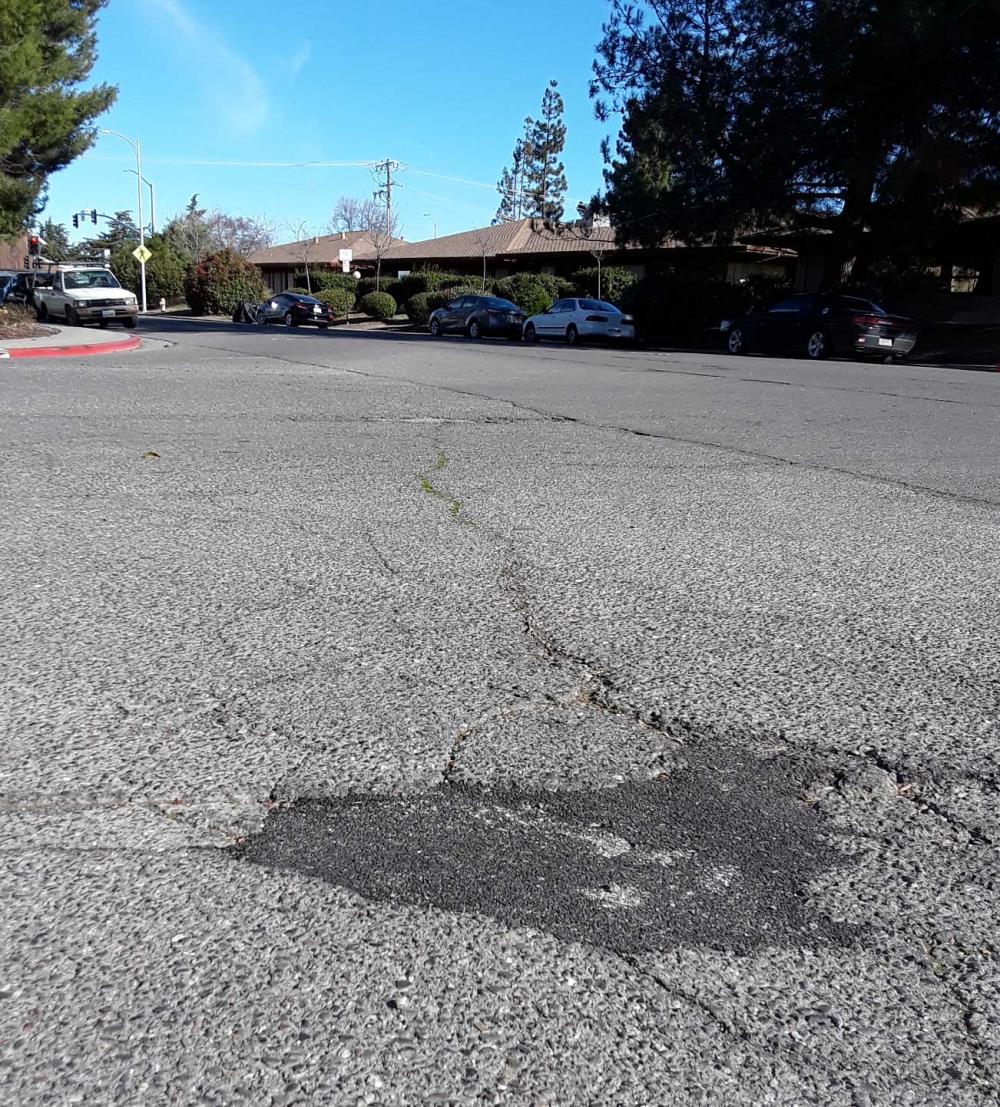 Can potholes be fixed in the winter months?
Yes, the cold-patch asphalt repair material that the City uses can be used in wet conditions, when temperatures are above 40 degrees Fahrenheit. Cold patch asphalt can be applied right from the container without heating. It does not require any special heavy rolling machines or special applications. It can be shoveled or poured into a pothole or utility cut and tamped down with a hand tool. The material contains pressure sensitive polymers that speed up the setup of the material. Conditions that make it difficult to repair potholes in the winter months include temperatures below 40 degrees as cold material is hard to work with, also recent rain can make it difficult to see potholes.

What if I am reporting something that is "not a pothole"?
There are many types of pavement defects that can be difficult to distinguish from potholes. If the issue reported is not a pothole, we will respond to you to let you know and the request will show on the Pothole Request Tracker as "Assessed as Other Condition."

What other issues can cause problems with the roadway besides potholes?
Other pavement issues that are not potholes (and often involve a much more complex repair process) include:

Depressions: localized pavement surface areas with slightly lower elevations then the surrounding pavement.
Rutting: channelized depression in the wheel-tracks. Results from lateral movement of any of the pavement layers
Shoving: formation of ripples across a pavement
Upheaval: localized upward movement in a pavement due to swelling of the subgrade
Raveling: on-going separation of aggregate particles in a pavement from the surface downward or from the edges inward

Investments must be made into street infrastructure to create long-term solutions to potholes and other pavement issues. There are three pavement treatment types - pavement preservation, pavement rehabilitation, and pavement reconstruction.

Pavement Preservation is proactive maintenance of roads to prevent them from getting to a condition where major rehabilitation or reconstruction is necessary. Pavement preservation includes:

Pavement Rehabilitation is carried out on pavements that exhibit distresses beyond the effectiveness of maintenance but do not yet warrant complete reconstruction. Pavement rehabilitation includes:

Pavement Reconstruction is completed when a roadway has deteriorated to a point where rehabilitation becomes too expensive and can no longer perform well due to the condition of the underlying pavement. Pavement reconstruction includes: