The Davis Senior Center has a long-standing history of serving the Davis community, beginning in the 1960s, when the City first provided meeting space in the Chestnut Roundhouse for the 50 Plus Club. Soon, additional space was needed and the program was moved to the old City Library Building (then known as the Teen Center). In 1972 the Parks and Community Services Department rented a storefront in the core downtown area (near the current Varsity Theatre) for the club. Soon thereafter, the 50 Plus Club officially incorporated as the Senior Citizens of Davis, Inc.

The continued expansion of senior programs and activities, social and health services, nutrition services, transportation services, and information & assistance programs soon emphasized the continued need for a larger facility. In the late 1970s, a movement toward a larger building formalized and, by 1981, the Davis City Council appropriated funds for design plans and designated the new site at 7th & A Streets. Phase I of the Davis Senior Center broke ground in September 1982, and opened to the public in early 1983. The Phase I section included a small multipurpose room, staff offices, restrooms, lobby and a small residential-style kitchen.

Immediately following the formal dedication of the new Senior Center in May 1983, due to the continuing demand for increased space and programs, the Senior Citizens of Davis began fundraising for a Phase II addition. After several years of fundraising, and with help from numerous private donations and local grants, the Phase II addition was officially opened in September 1987. The Phase II addition provided another large multipurpose room, which could be divided into two smaller rooms, a large professional catering kitchen (the McNece Kitchen), additional restrooms, and a smaller room for games. The Phase II Expansion not only provided the necessary programming space for senior services, but it also provided a high-quality rental facility for the entire community at large. 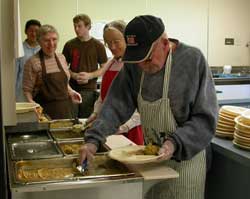 In 2001, with the ever-looming Baby Boomer generation nipping at our heels, plans began for the Phase III addition to the center. The new expansion would provide additional programming space for senior services, but also provide a permanent home to the Alternative/Inclusive Recreation program which serves developmentally disabled teens and adults. (The program had been previously housed at Redwood Park.) Through the combined planning & fundraising efforts of SCD, the Senior Citizens and Recreation & Park Commissions, Alternative Recreation participants, and many private individuals, foundations and community organizations, construction began in May 2004 for the Phase III addition. The $1.1 million, 2,750-square-foot addition was completed in 2005.

The addition includes a large, open space called the Valente Room; a full, accessible kitchen; a comfortable lounge area with fireplace; an office for the Alternative Recreation Program; and a small conference room, the O'Rourke Board Room, named after SCD’s long-time Treasurer Joe O’Rourke.

Since 1987, the Davis Senior Center has expanded its services for older adults, which now includes over 275 different programs and activities offered through the center. Through the ongoing support of its members, the Senior Citizens of Davis (SCD) has also led the way to numerous other accomplishments which have enhanced the amenities at the Senior Center, such as the purchasing of new furniture and entertainment/computer equipment, the creation of a senior scholarship program which provides financial assistance to older adults participating in Senior Center activities, the funding of the Senior Scene newsletter, and the creation of the Senior Memorial Bronze Statuary, “Nurturing the Seeds of Tomorrow,” in 2002.

The Senior Center remains a vibrant “place of possibilities” where city staff, Senior Citizens of Davis, and other community members have come together in a common goal: to offer older adults programs and services that can keep them healthy and active for as long as possible.