Why the Highwheel Bicycle is the City Logo

Here is how the bicycle became the city logo:

Because the agricultural land around the City of Davis is flat and the climate is relatively mild year-round, riding a bicycle has always been an easy way to get around town. University of California students have been coming to Davis since 1908 and bicycling has always been an important part of their campus experience. After the city incorporated in 1917, the increasing number of paved roads encouraged local citizens to take up cycling.

Because of rapid growth of the university and the city, traffic conflicts between the increasing number of bikes and vehicles were increasing. After acknowledging that the well-educated and well-traveled citizenry would be receptive to European-style bikeways, the Davis City Council decided in 1967 to create a few short blocks of bicycle lanes. As a result, Davis became the first city in the United States to install official city bicycle lanes.
Learn more about the first bicycle lanes in Davis.

The combined system of bicycle lanes and dedicated bike paths today reaches well over 100 miles in a small town that is only about 11 square miles. Davis has become a model for hundreds of U.S. cities because of its safe, integrated bicycle transportation network. The UC Davis campus has developed its own extensive bicycle path system and support programs. 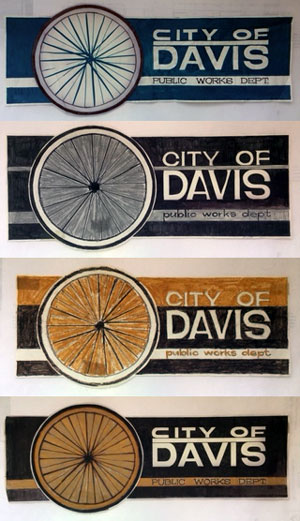 Sketches for an early 1970's logo design by Jeanette Copley

Shortly after the first bicycle lanes were created, the community planned to celebrate the Davisville Centennial in 1968. The first train stopped in the area in 1868 and the town was named after a local livestock farmer named Jerome Davis. A book about the history of Davis was commissioned to be written by Joann Leach Larkey and illustrated by Jeanette Nunn Copley. The book was titled “Davisville ’68: The History and Heritage of the City of Davis”.

When the time came for the Centennial Committee to decide what image would appear on the cover of the Davis history book, the symbol of the bicycle was the one that most of the committee members preferred as a representation of the town.

A few years after Davisville’s founding, the highwheel bicycle evolved from the earlier “boneshakers” and velocipedes into a machine that revolutionized personal transportation. As ungainly as it may appear to us today, the highwheeler was a huge improvement in comfort, speed, and reliability compared to its predecessors. In the 1880s, highwheels were ridden across the nation and even around the world.

Jeanette Copley created a stylized version of a high wheeler bicycle for the cover of the new Davis history book and the bicycle was on its way to becoming a Davis icon.

Artist Jeanette Copley was also married to Davis city engineer Duane Copley. During the 1970’s, Jeanette had designed identifying decals for city Public Works trucks and equipment featuring a bicycle wheel with spokes. In 1981 when the Davis City Hall moved from its historic building at 226 F Street to the remodeled former Davis High School building at 23 Russell Boulevard, the city decided to create a new city logo. 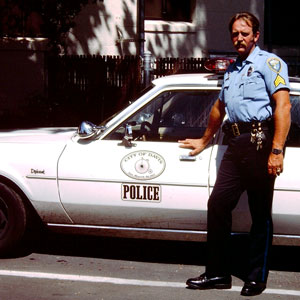 Because of the universal acceptance of the bicycle as a symbol of Davis and its dedication to promoting bicycling for transportation, recreation and fitness, the city council chose a new logo with a stylized high wheeler intertwined with “Davis, California”. The City of Davis logo is a striking example of how the bicycle became an integral part of the community fabric. Over the years, variations on the high wheeler image have been incorporated into the logos for many Davis businesses, organizations and sports teams.

The bicycle image has also come to symbolize the community’s commitment to a “green”, sustainable and healthy lifestyle.

Over the years the City of Davis has become even more pro-bicycling in its planning and policies as well as promotional events, educational programs and infrastructure.

The 2010 U.S. Census Bureau count revealed that Davis had the highest percentage of bicycle commuters in the U.S. An estimated 22.1% of the working population commuted to their job using a bicycle. The Davis’ Bicycle Plan aims to increase the amount of bicycle trips as a percentage of all trips made in town to 25%.

Bike lanes and trails permeate the community and enable people of all ages to ride to school, work, for recreation and errands.

Bicycling has literally become the vehicle for collaboration between the Davis city government and the school district, UC Davis, the business community, local nonprofit and service organizations and Davis citizens. The City of Davis has historically taken the lead on bicycle support and infrastructure. Over the years however more and more bicycle related activities have become supported by volunteer, non-profit and school organizations.

The History of the Highwheel

The bike depicted in the City of Davis logo is variously referred to as a highwheel, highwheeler, ordinary, or penny-farthing. In the journal, "The Wheelmen", the official publication of collectors, riders and aficionados of antique bikes, these machines are most often called "highwheels".

They get this name for obvious reasons --the rider sits up so high. The highwheel evolved from bikes with more equally sized wheels. The quest for speed and efficiency led to the larger front wheel -- the only way to give the bike a higher "gear" before the use of chain drives and sprockets.

The highwheeler came to dominate bicycling from its origin around 1870 to the beginning of the 1890’s. The type evolved from earlier “velocipedes” which had more equally–sized wheels as on modern bikes, but on which the pedal cranks were affixed directly to the front wheel (as on children’s tricycles).

The key to making faster velocipedes was found to be through enlarging the front pedal–driven wheel (resulting in a higher “gear”) and reducing the size of the rear wheel to lower the bike’s overall weight. Placing the rider almost directly over the front wheel was found to be a most efficient pedaling position. This riding position in combination with the large spoked wheel made for a much smoother ride than was possible on the old velocipedes—an important factor given the rough nature of the existing dirt, gravel and cobblestone roads.

The 1870 English “Ariel” was the first relatively light all–metal bicycle and the first to have wheels built with adjustable spokes. Other innovations pioneered by high wheeler builders include hollow forks and tangentially arranged spokes. Racing machines were built weighing under 24 pounds, a figure comparable to some of today’s best bicycles.

The high wheeler’s biggest disadvantage was poor stability. The center of gravity being almost directly over the front axle meant that encountering only a small obstruction on the roadway or a too–vigorous application of the brake (usually a “spoon” type pressing down on the top of the front solid-rubber tire) could easily pitch the rider head first from his lofty height onto the road. On descents, where the threat of a “header” was very real, daring cyclists would often drape their legs over the handlebar so that in a spill they would likely land on their feet rather than have their limbs trapped under the bar.

Despite this drawback, the high wheeler was the first practical human-powered wheeled vehicle. It brought mobility and an expanded range of travel to a large segment of the middle classes in Europe, England and the U.S. who previously couldn’t afford to own or operate horses or carriages. 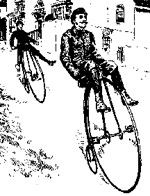 Epic adventures captured the Victorian imagination, and cyclists were not immune to the lure of the open road. Distance and speed records were constantly set and broken in the 1880’s, culminating in Thomas Stevens’ two-and-a-half year round-the-world trek begun in 1884 on his American-made Columbia. On the same trip Stevens was the first across the U.S. by bicycle. The design's popularity over its predecessors earned it the name of "ordinary" as it quickly became the most common two-wheeled vehicle of it’s time.

The highwheeler's propensity to throw its rider was its demise. Various builders resorted to smaller wheeled bicycles with a chain-and-gear drive which retained the rider's position above the pedals. With proper gearing, this configuration allowed the same or even higher "gear" than was possible on the highwheeler where the cyclist's leg length was the limiting factor.

The 1888 adaptation of John Dunlop’s newly invented pneumatic tire to these new “safety bicycles”, as they came to be called, spelled the ordinary’s doom. The ordinary’s one last advantage—a comfortable “sprung” ride—was more than matched by the cushioning effect of inflatable tires. The “safety” came to dominate cycling in the 1890’s, making the roads accessible to even more enthusiastic converts.

Alas, in a few short years the expanding network of good quality roads, the result of intense lobbying efforts by cyclists, saw a new competitor for space, the automobile. Ordinaries, which came to be called by the derisive term “penny–farthing” as safeties grew in popularity, had all but disappeared from public roads by the dawning of the Twentieth Century.

Many remaining highwheelers were collected during scrap metal drives during the Great War of 1914–18, making the few remaining machines valuable and highly desired collectibles today, as well as nostalgic reminders of bicycling’s Golden Age.