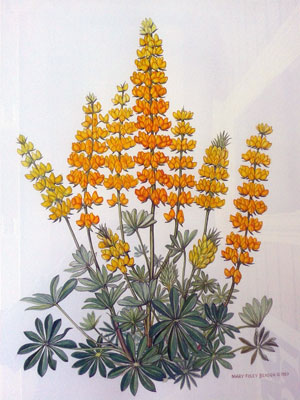 In 1983, the late Mary Foley Benson, a highly respected scientific illustrator and artist donated an original watercolor of a Golden Lupine to the City of Davis. The plaque on the illustration reads:

Mary Foley Benson's watercolor painting was on display at City Hall for many years. During a renovation project in the early 2000's, the painting was removed from display for safe-keeping, but was not returned to display following the project.

In 2013, the painting was officially added to the collection of the City of Davis Civic Arts program, and was returned to display at City Hall.

About Mary Foley Benson
Mary Foley Benson graduated from the National School of Fine and Applied Art and studied at the Corcoran School of Art in Washington, DC, and the Otis Art Institute in Los Angeles, CA.  She was a pilot prior to World War II and was in the Army Air Corps during the war. She became the Chief USDA Scientific Illustrator. After leaving her position with USDA at the Smithsonian Natural History Museum, she relocated to the west coast and established a studio in Hollywood, CA. In 1964 she moved to Davis, CA where she illustrated insects for several entomologists at the University of California. She produced many color plates for the book, Mealybugs of California by Howard L. McKenzie. Mary Foley Benson’s illustrations are widely published and her work was shown in a variety of art galleries. Mary Foley Benson passed away in 1992.