In the early 1960’s, conflicts between bicyclists and vehicles were increasing as Davis and UC Davis both grew rapidly. Petitions from residents requested the creation of bicycle lanes and bike parking as the town developed. In 1965, local citizens Frank and Eve Child and Dale and Donna Lott suggested that Davis should create bicycle lanes similar to those in the Netherlands.

In 1966 Norm Woodbury and Maynard Skinner were elected to the Davis City Council after advocating support for bicycle lanes. By June 1967 these two joined then-Mayor Kent Gill to approve the very first Davis bicycle lanes.  A subsequent bill establishing the right for California cities to install bike lanes was also passed by the California state legislature and signed by then-Governor Ronald Reagan.

By late July 1967, the very first official bike lane in Davis and in the United States was created on 8th Street between A Street and Sycamore Lane. It was the first time that a lane for the preferential use of bicyclists had been designated as part of an existing roadway meant for vehicles. Other bike lanes soon followed on Sycamore Lane (between Russell Blvd. and W. 8th St.), J Street (between 3rd St. and 8th St.) and on this section of 3rd Street (between the railroad tracks and B St. after work was completed on downtown drainage pipes).

Although paths for bicycles had existed as far back as 1895 in Brooklyn, no one had ever developed design standards for bike lanes on city streets.  How wide should the bike lanes be? How would bicycles turn left through an intersection? Where should bike lanes be placed in relation to parked cars? Through trial and error, the city’s Public Works Department with the help of bicycle advocates and citizens, developed bike lane safety specifications and regulations that were adopted by Caltrans and copied across California and the United States.

The League of American Bicyclists awarded Davis with its first ever Platinum Level Bicycle Friendly Community award in 2005. Within its eleven square miles, the city has over 100 miles of designated bike lanes and paths. Davis has more bike commuting residents per capita than any other city in the U.S. The City of Davis is truly America's #1 "City of Bicycles". 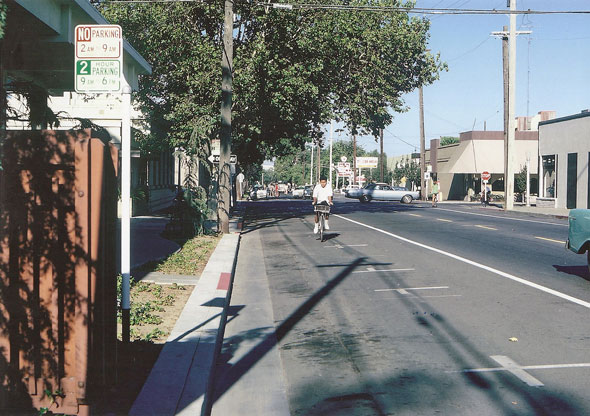 Third Street Bike Lane: When creating the first designated bike lanes, there was concern about the interaction of bikes with parked cars, doors opening into the lane, and cars pulling into and out of parallel parking. Vehicle parking along the Third Street bike lane was originally allowed only after 9:00 a.m. to reduce morning bicycle commute conflicts. 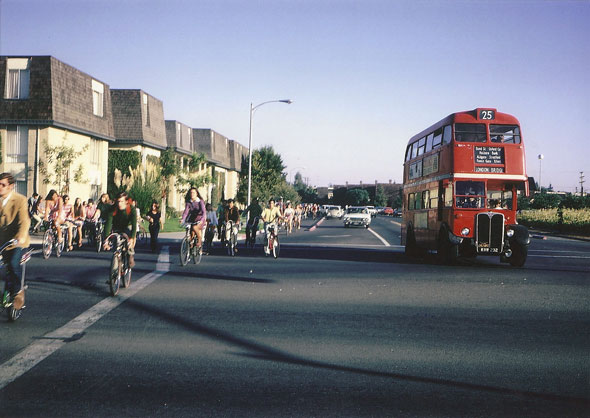 Sycamore Lane Experiment: This 1967 bike lane used concrete bumpers to separate parked cars from the bike only lane. The parked cars screened the visibility of bicyclists coming into intersections and cars would unknowingly drive into the bike lane. This bike lane design was eventually abandoned. 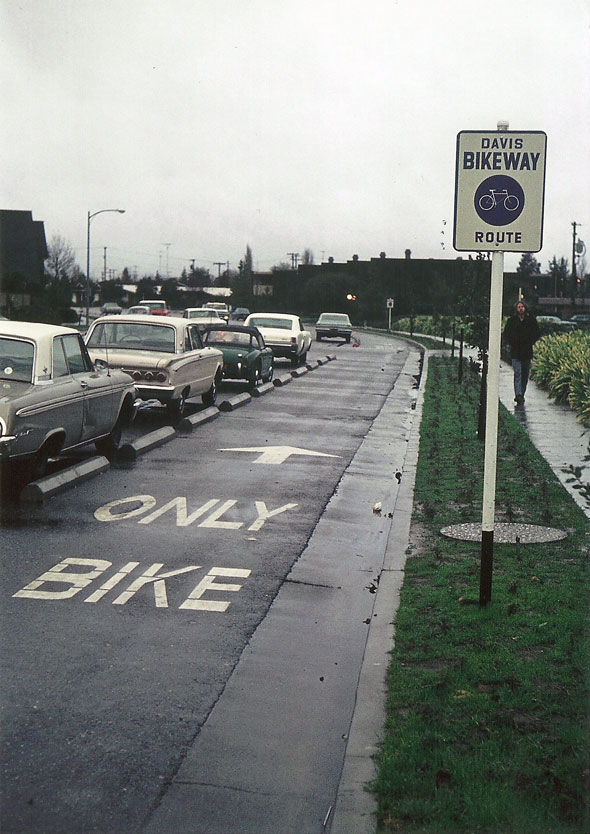 The 1967 separated bike lanes on Sycamore Lane didn’t prevent conflicts with turning vehicles. Today at this intersection there are special bike-only traffic signals that provide cyclists their own crossing phase. These innovative bicycle signals were the first of their kind to be installed in the United States.

More information can be found at: